On top of spaghetti, all covered in cheese, I lost my poor meatball, when somebody sneezed. It rolled off the table, and onto the floor…
This is the beginning of a song I used to sing when I was little, and it brings backs memories of slurping spaghetti and eating meatballs, and the fun of being a kid. I was reminded of this song, when we tried to cook meatballs for dinner the other evening.

I was finalising my first post on this blog and my eldest daughter Joanna, was going out, and needed to have an early meal. She offered to cook dinner and I gladly accepted. On the menu that night was Meatballs.

Meatballs are a great use of mince, and you can simply add any seasonings you fancy, as long as the mixture is not too soft.
Joanna chose to use onion, garlic, egg, stock cube, breadcrumbs & pizza sauce. After rolling the mince into balls, she asked me to check the texture. I told her they looked good, and she started cooking them on the stove top. It became evident that the meatballs were too soft as they were starting to crumble. We transferred the meatballs to a pyrex dish in the oven, and half way through we added some store-bought pasta sauce. The glass dish shattered when the cold pasta sauce was poured over the meatballs. The meatballs were wounded and irrecoverable! Did that really happen? It was one of those OMG moments.

My blog post was now complete, so I was able to give my full attention to dinner. The glass was cleared off the floor, the offending dish was left to cool in the oven and I left Joanna to analyse what had caused the explosion. Okay, what now, where’s my I-phone? The spaghetti was already cooked, and a quick sauce was required. With a few ingredients from the pantry and fridge something could be created.

I decided to adapt a recipe from the Jamie Oliver’s 20 Min Meals APP, to make a quick sauce to go on top of the spaghetti. 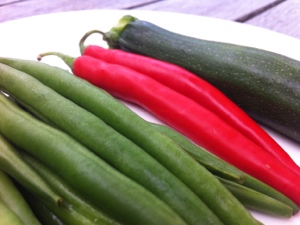 TUNA AND CHILLI SAUCE with beans
1 bunch of French beans

Cook the chopped beans for 3 minutes in a pot of boiling water.

While the beans are cooking, fry the onion in a little olive oil for a few minutes. Add the chilli and cook for a minute, then stir fry the courgette for a further minute. Add the tinned tuna and tomatoes, stir and simmer for a further 5 minutes. Season with salt and pepper, and a squeeze of lemon juice to you own taste. Combine the sauce with the cooked beans, add to spaghetti and serve.

Welcome to my Kool Kosher Kitchen where food is fun and fun is to create food!

Flavor Smasher
Travels with the G-Unit
Life Is A Journey

Currently traveling in South America with a bicycle